2nd Father And Son Slaying In Joliet Since 2019

by Duong
in Joliet

JOLIET, IL — Joliet area police detectives are investigating another case in which a Joliet father was gunned down shortly after his son was slain.

On Saturday night, 42-year-old Todd N. Taylor of Joliet was fatally shot four times in the upper body while he was inside a parked vehicle in the 100 block of Oscar Avenue, not far from Gardner Street on the city’s east side. Taylor lived in the 600 block of Joliet’s Elmwood Avenue, according to recent court records.

The Will County Sheriff’s Office is investigating Taylor’s slaying, since the crime happened outside city of Joliet limits.

Find out what’s happening in Joliet with free, real-time updates from Patch.

Todd Taylor’s 20-year-old son, also named Todd Taylor, was gunned down in a driveway in the 300 block of Joliet’s Grant Avenue on April 28, 2020. The younger Todd Taylor also died from multiple gunshot wounds.

The younger Todd Taylor lived in Rockdale, according to police.

Find out what’s happening in Joliet with free, real-time updates from Patch.

In that case, at 8:59 p.m., Joliet police officers heard gunshots in the area of 5th Avenue and Sherman Street and saw a black Cadillac SUV fleeing the area. The SUV refused to pull over near 4th Avenue and Richards Street and headed westbound on Interstate 80, police said. Officers pursued the Cadillac SUV on westbound Interstate 80, to southbound Interstate 55, to the area of West Coal City Road in Diamond where police say the SUV stopped, and the suspects ran off.

Police arrested Payton on three counts of first-degree homicide, and unlawful use of a weapon. The arrest was made by the Grundy County Sheriff’s Office at a house in Diamond. A Will County judge set bail at $2.5 million for Payton. He remains in the Will County Jail and his case has not been set for trial, yet.

The 2020 killing of 20-year-old Todd Taylor happened just five hours after the slaying of 47-year-old Floyd Faint Sr., who was gunned down right outside his house in the 700 block of Joliet’s Francis Street, near Henderson Avenue.

Less than two months shy of turning 48, Floyd Faint Sr. was fatally shot multiple times around 4:45 p.m. in his driveway in the 700 block of Francis Street, near Henderson Avenue.

On July 20, 2019, a memorial was placed along the I&M Canal State Trail on the outskirts of Joliet by friends and relatives of 29-year-old Joliet resident Floyd Faint.

Nearly three years later, nobody has been arrested in connection with Floyd Faint Jr.’s slaying. The Illinois State Police are investigating Floyd Faint Jr.’s homicide. In 2019, the Will County Crimestoppers announced that state police were attempting to locate Deamonte T. Hunter of Joliet for questioning surrounding the violent death of Floyd Faint Jr.

Hunter was charged with aggravated unlawful use of a weapon by a convicted felon and resisting the arrest, jail logs show. He was not charged in connection with Floyd Faint Jr.’s death.

Now 24 years old, Hunter pleaded guilty to one count of unlawful use of a weapon by a felon in November and got a seven-year prison term from Will County Judge Carmen Goodman. As part of the plea, Hunter was credited with 506 days of time already spent in the Will County Jail. 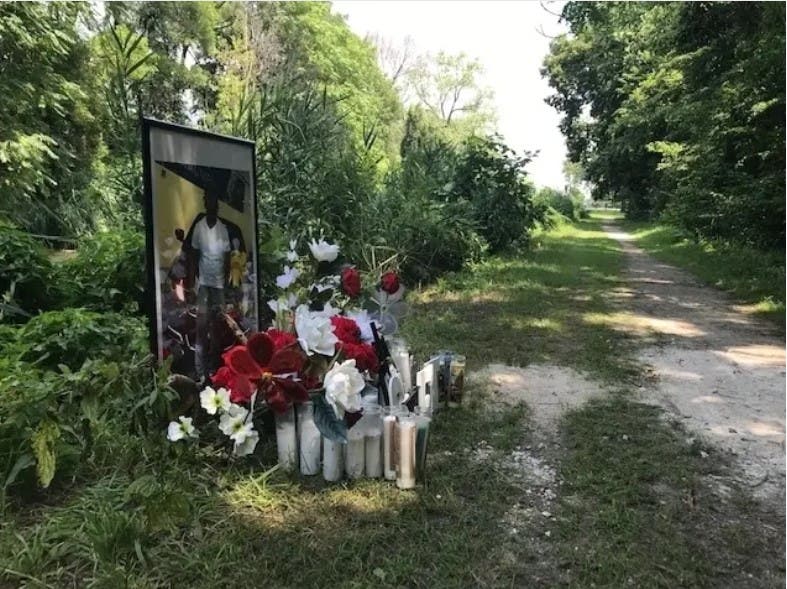 To request removal of your name from an arrest report, submit these required items to arrestreports@patch.com.