At least one Illinois school district has canceled classes for Monday and many others have decided to recommend masks following a decision by a downstate judge that effectively prohibits a statewide mask requirement in schools.

As school districts across the state begin to interpret the order, different actions are being taken.

“We recognize the challenges this decision may have on our families, but given the fluidity of the situation we strongly feel that this time is necessary to effectively plan for any potential impact on our students, staff, and school community,” said Dr. Kent Mutchler, superintendent.

Community Consolidated School District 181, which has schools in Clarendon Hills, Hinsdale, and Burr Ridge, said Monday will be an emergency remote instruction day. 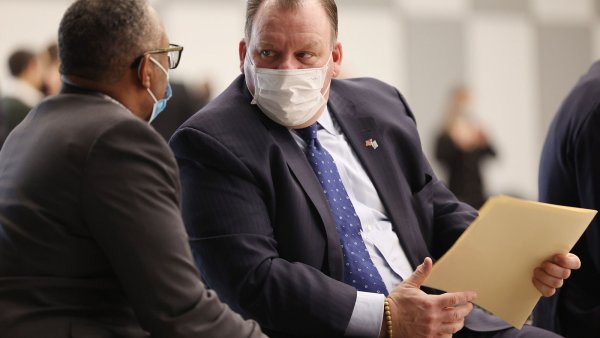 “Due to the multiple interpretations of the ruling and the status of the State mandates, there is a strong likelihood that there will be disruption in our schools which will have a substantial negative impact on the delivery of instruction and the health and safety of our students and staff,” the district said in a letter to families.

Arlington Heights School District 25 distributed a letter to parents saying it will be in a “mask recommended environment” – at least during the Temporary Restraining Order period.

Crystal Lake Elementary District 47 issued a similar message explaining “face masks will be strongly recommended but not required at school and at all school-related events for staff and students, as well as visitors and volunteers.”

In south suburban Burbank, School District 111 will “fully comply with the court’s ruling,” but recommends masks be worn by all students and staff in school buildings.

Elgin Area School District U46 is standing by its requirement, explaining its Board of Education approved a resolution in August of last year supporting that the district follows recommendations issued by the Centers for Disease Control and Prevention as well as local health agencies.

“Within her ruling, Judge Grischow, recognizes the independent authority of school districts,” Supt. Tony Sanders said in a letter to parents.

However, the district explained there are students who have exceptions as they are included in the lawsuit in which the TRO was issued.

Vernon Hills-based Community High School District 128, too, will still enforce the mask mandate, except for when it comes to students named in the lawsuit.

Others, however, are waiting for clarification before proceeding.

Oswego Community Unit School District 308 said it was “consulting with our district attorneys to further understand the impact of the decision for our students and staff.”

Some districts are put in a different situation due to collective bargaining agreements.

According to the ruling, such agreements remain enforceable, like the one between Chicago Public Schools and the Chicago Teachers Union.

“…We expect the mayor and CPS to act responsibly and uphold our agreement to require masks — providing KN95 masks for every adult and child in our schools,” CTU said in a statement. “This is what the overwhelming majority of Chicago parents and families support.”

The lawsuit in question was filed last year by more than 700 parents who alleged Pritzker’s order on COVID-19 mitigations in schools deprived students of due process.

Attorney Thomas DeVore, who represents the hundreds of parents, said the case is not about pushing an anti-mask agenda, but instead focused on who has the authority to make such decisions.

But at least one Illinois school parent feels the lawsuit and temporary restraining order won’t help end the pandemic.

“These aren’t normal times,” said Shannon Limjuco, a parent in Wheaton-based Community School District 200. “And we need to allow our schools to have…and use the tools that can keep our schools safely open.”