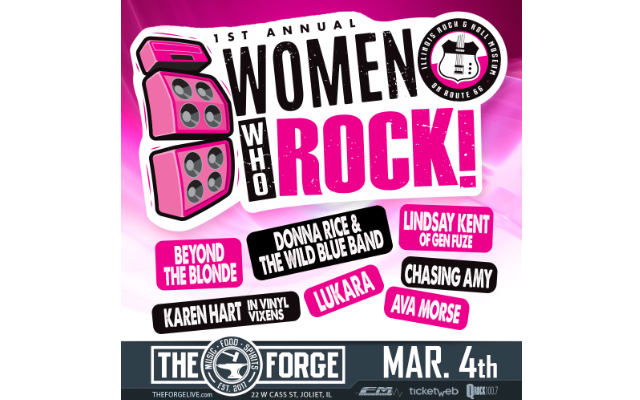 In recognition of March being named “International Women’s History Month” and to celebrate “International Women’s Day” on March 8th, the Illinois Rock & Roll Museum on Route 66 in Joliet is excited to announce the 1st Annual “Women Who Rock Concert” on Friday, March 4th from 6:30pm to 11:30pm at The Forge located at 22 West Cass Street in downtown Joliet, IL.

The event is a benefit for the museum which is a registered non-profit organization dedicated to preserving the history of musicians and bands with ties to Illinois. The museum also exists to educate visitors about Illinois’ rich music history and supports local musicians, performers, and others in the music industry and performing arts in the form of scholarships and donations. Artists scheduled to perform include Beyond The Blonde, Ava Morse, Donna Rice & The Wild Blue Band, Lindsay Kent of Gen FuZe, Karen Hart in Vinyl Vixens, Lukara, and Chasing Amy. Radio and television personality Dolly McCarthy will emcee the event.

“This benefit concert will showcase female singers and musicians and emphasize the importance of live entertainment in our community,” said Ron Romero, Museum Founder & Chairman. “It will also bring an
awareness of the enormous talent base in the region, as well as to the museum’s mission which is to collect, preserve and exhibit artifacts of Illinois artists who have reached national and international recognition, and to provide enlightening educational programs,” said Romero.

Pre-sale tickets can be purchased on the museum’s website at www.RoadToRock.org.