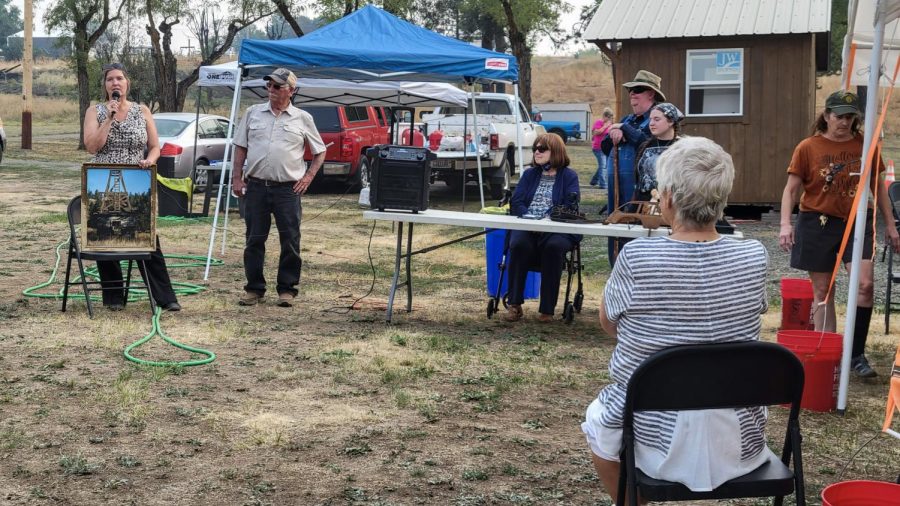 Sunday afternoon bore a striking resemblance to Labor Day weekend of 2020 for the communities of Malden and Pine City.

The familiar smell of smoke hung in the air as neighbors gathered to mark the anniversary of the wildfire that devastated their rural communities two years ago.

Over 50 residents of the Pine Creek area gathered in Malden City Park on Sunday to celebrate two years of recovery since the Babb Road Fire swept through the towns of Malden and Pine City. The celebration featured a potluck lunch, free bicycle tune-ups and a raffle of homemade quilts.

The Babb Road Fire ripped through Malden and Pine City on Sept. 7, 2020, destroying 67 homes and 15,000 acres in its wake, according to a Seattle Times article.

Although the recovery process has been slow, Malden Mayor Dan Harwood said he is proud of the progress made so far. A temporary fire station and 26 homes have been constructed since the fire, and several projects to improve the area’s infrastructure are ongoing, he said.

“We’re busy,” Harwood said. “We’re a town in recovery and we’re all going in one direction.”

Recovery efforts have been fueled by support from volunteers, charitable organizations and a mix of federal and state grants, said Christine Oakley, member of the Pine Creek Community Restoration Long Term Recovery Organization. Established in the weeks following the wildfire, the nonprofit organization oversees the fundraising and recovery process for the Pine Creek area and over 200 residents that were displaced.

Oakley said an influx of funding has allowed for more progress over the last year than during the initial year following the wildfire.

Former President Donald Trump refused to provide Federal Emergency Management Agency (FEMA) aid in 2020 due to a political conflict with Gov. Jay Inslee, leaving the area without federal assistance until President Joe Biden approved a disaster declaration in February 2021, according to a Spokesman-Review article.

Since receiving federal aid, Malden and Pine City have been able to rebuild several structures, erect a cell tower and begin planning for a new community center and reconstructed Malden City Park.

Community members were able to give their input on the park project at Sunday’s gathering. SCJ Alliance, a Spokane based engineering firm, provided residents with a list of park features like sport fields, play equipment and amenities, asking them to vote on their favorites. Residents could see how the layout would look using paper cutouts of the elements on a map of the park.

“They can come in and play with the different pieces of the park, see what they like or might not like,” said Scott Rivas, SCJ Alliance senior project manager. “This is in the heart of their community, so we want to hear from them.”

Rivas said construction on the park could start as soon as next spring. The project will be funded by state and federal grants, in addition to donations from organizations like the United Way of Whitman County.

Francene Watson and her partner Scott McBeath, co-owners of 3Forks Bike Shop, journeyed from Pullman to offer their expertise to the residents of the Pine Creek area. McBeath fixed faulty brakes, aired up tires and rethreaded handlebars while Watson oversaw a miniature BMX course they brought along.

“We’re trying to build a little bike community in the area and really just help establish the essentials of bike safety,” Watson said.

The free service was part of several trips to small towns in Whitman County the couple has taken in recent years to help promote cycling safety, Watson said. The couple started the trips in partnership with Palouse Alliance and the Meter Foundation after a Pullman child died from injuries sustained by falling on the exposed metal end of a handlebar in 2018.

In the coming years, the city of Malden plans to build a large structure that will house a permanent fire station and the city council and a community center in Malden City Park. Harwood said he looks forward to the completion of the two projects and the revitalization of the once-bustling railroad communities of Malden and Pine City.

Will Chicago Voters Back A Candidate For Ill. Governor Who Bashes The City?

Darren Bailey, the Republican nominee for Illinois governor, spent the summer bashing Chicago as “a crime-ridden, corrupt, dysfunctional hellhole.” But apparently, he’s had a change of heart. He recently admitted that he was living atop the city in the John Hancock Center, one of Chicago’s biggest skyscrapers.Bailey’s persistent anti-Chicago rhetoric...

WASHINGTON – “God bless you, let’s have some music,” said Elton John. Elton John performs on the South Lawn of the White House in Washington on Friday. Susan Walsh/Associated Press With that, the White House South Lawn was transformed into a musical lovefest Friday night as John played a farewell...

Legislatively Speaking By Senator Lena C. Taylor Lena C. Taylor In June 2015, when Donald Trump came down his likely overvalued escalator, he gave what would be the first of many rambling and disconnected speeches. In his presidential bid announcement, he was clearly detached from reality as he promised to...