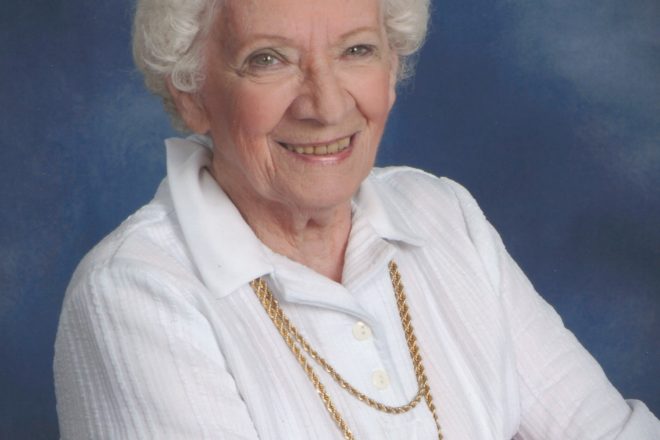 Shirley Mae McMullen, lover of good wine, great scotch, music, dancing, acting, hugging, and kissing her family, died at her home in Franklin, WI January 3, 2022 at the age of 92.

Shirley was born on November 1, 1929 in Chicago, IL, her parents were Evelyn and Charles Rioch.  While attending Northwestern University, she met the one and only love of her life, Donald McMullen (who passed away September 22, 1998). They married in 1956, had 2 children, and after 10 years in Chicago moved to New York. For the following 15 years, she spent time working in theater while Don was a professional photographer. This created many stories of the New York speed record in costume changes and attending extravagant parties where she often fashioned her own evening attire. In 1981, their lives and hearts forever moved to Egg Harbor in Door County, WI where they opened and operated Grandma’s Grill. She built a reputation working for multiple businesses in Door County such as the Cupola House, bookkeeping for hotels, and helping Don at The Egg Harbor Marina. Although her heart never left Door County, in 2016, she moved to Franklin, WI enabling more frequent visits with family.

Grandma, as she proudly preferred to be called, epitomized what it meant to enjoy life. She loved reminiscing about times she drank, laughed, and danced with her husband, friends, and even her grandchildren. She was never short on stories to tell and always had your favorite drink ready when you came to visit. She took pride in her every day hobbies knitting, crochet, and needlepoint, especially making Christmas stockings and baby blankets for her grandchildren and great grandchildren. She loved trying new recipes (giving each a star rating), gardening, decorating and rearranging her home for each season, doing crosswords, and playing the piano. Whether you were in the mood to talk about cooking, learning about red wines and scotch, chatting about politics, religion, or life’s struggles, she was someone you could count on for great company. Her unceasing faith in God provided many inspirational points of view about living life to the fullest, often saying “don’t worry about tomorrow”, “live for today”, and reminding us to always think positive and trust in God’s plan.

A memorial service will be celebrated at 11 AM on Saturday January 15 at Calvary United Methodist Church, 4650 County E, Egg Harbor, WI 54209. Visitation will be at church from 10 AM until time of service. In lieu of flowers, a memorial fund has been set up at Calvary United Methodist Church. Please send donations in her name to the following address: P O Box 168, Egg Harbor, WI 54209.