by NewsReporter
in Rockford

The Goo Goo Dolls are one of those bands with a catalog of music that followed you around for much of the mid to late ’90s. Whether you sought out the group’s music or not, the sounds and melodies put out by John Rzeznik, Robby Takac and their assorted ensemble of colleagues are as much a defining part of the cultural fabric of the time as anyone else.

It was, frankly, impossible to flip among the FM radio dials avoid landing on “Slide,” “Broadway,” “Name,” or the truly inescapable “Iris,” originally released in 1998 on the soundtrack for the Meg Ryan/Nicolas Cage drama City of Angels. That song recently eclipsed a BILLION streams on Spotify, so you know it isn’t going away anytime soon.

Neither is the band itself, having just released its 13th studio album, Chaos in Bloom, last month. With the new record in focus — as well as that repertoire of era-defining, melancholy pop/rock anthems, of course — the Goo Goos rolled through the Santa Barbara Bowl on Sept. 3 for a thoroughly entertaining stop on a tour that was twice-delayed by the pandemic.

The gorgeous, intimate outdoor venue, nestled in the hills like a smaller version of the Greek Theatre in Los Angeles, was packed with a sea of people for the show, which opened with a set from special guests Blue October.

Introducing his band by saying, “We love rock and roll, we’re the Blue Octobers,” singer/guitarist Justin Furstenfeld was an honest, open and energetic presence, leading his band through a number of earnest, emotional rock/pop singalongs steeped in tales of addiction, recovery and the resilience of life itself — songs such as their pair of platinum 2006 singles, “Into the Ocean” and “Hate Me.” Judging by how familiar many in the venue seemed with the band, it was clear this was a solid tour pairing. 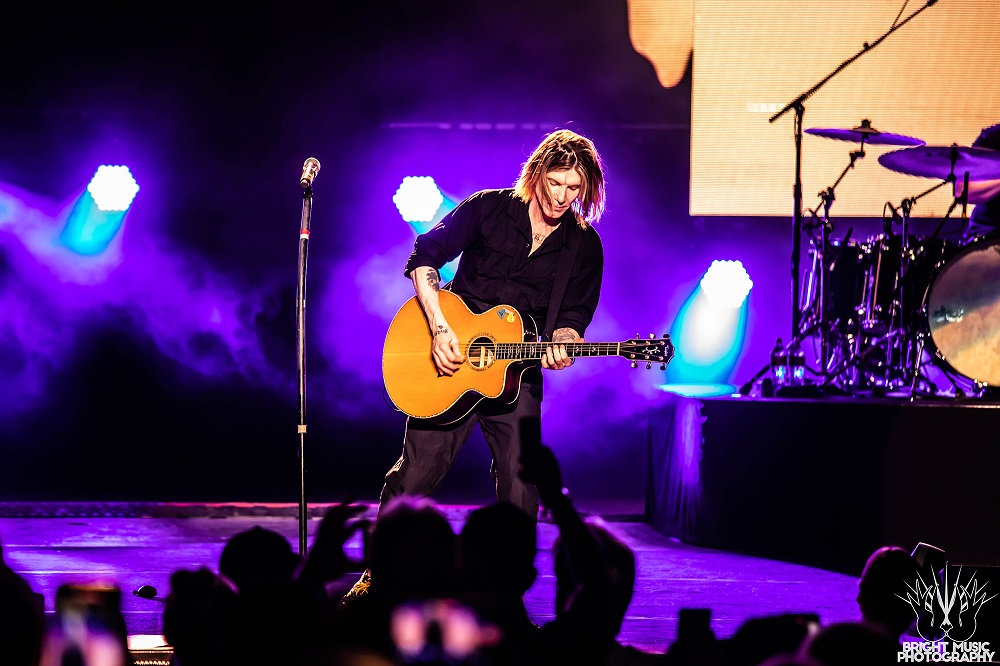 When it came time for the main act, most of the crowd that had remained middling around in the courtyard/bar area thus far in the night had made its way back to the seats, ready to sing along with Rzeznik front and center as singer/guitarist/focal point, flanked as always by Takac on bass and vocals and touring members Brad Fernquist (guitar), Craig Macintyre (drums) and Jim McGorman (keys/guitars).

An important element to keep in mind for those only familiar with the band’s (many) hits — the most notable and recognizable songs are sung by Rzeznik, sure, but Takac also maintains a steady vocal presence on each Goo Goo Dolls album. As the lone remaining co-founders of the project, Rzeznik and Takac have a seamless rapport onstage together that can only come from decades of musical partnership.

As a result, Takac gets his share of the spotlight in the live show, which in this case meant taking center stage on several his own songs from over the years. 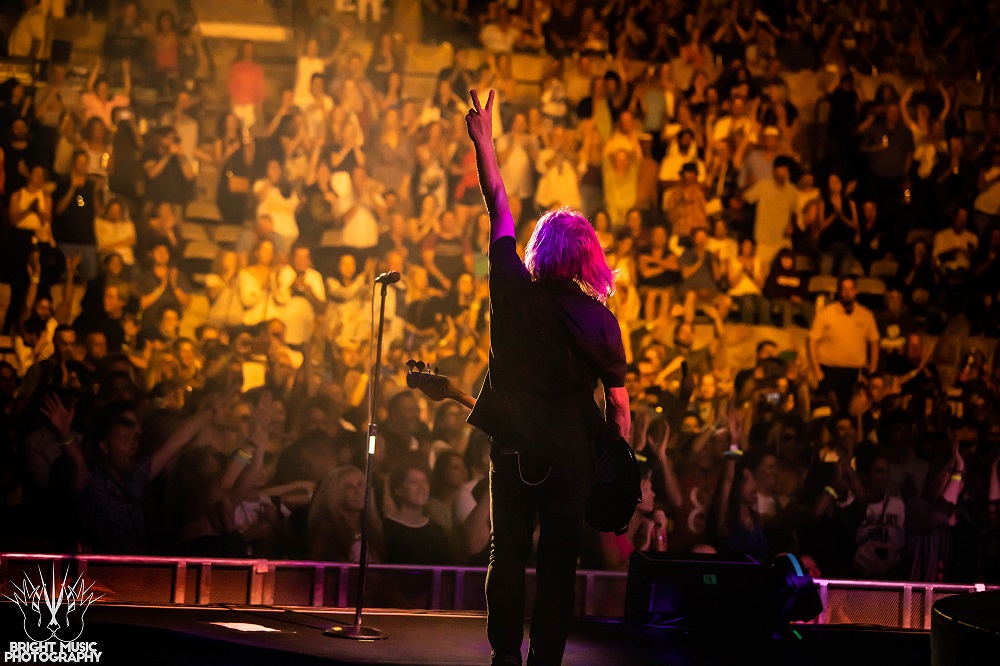 “Free of Me” (from 2016’s Boxes), “Life’s a Message” (from 2019’s Miracle Pill), “Bringing on the Light” (from 2013’s Magnetic) and “Lucky Star” (a garage-y throwback from 1993’s Superstar Car Wash) were a nice touch for dedicated fans of the band, deeper cuts showcasing Takac’s presence as he bounded around the stage with abundant enthusiasm, very clearly still having a lot of fun with these songs.

When it came time for the hits, though, they were met with shrieks of excitement — and there were many, arranged strategically throughout the set list to emphasize their impact. “Black Balloon,” arguably one of the band’s finest songs and a standout from Dizzy Up the Girl, was performed as black balloons bounced around the stage. It wasn’t clear whether these balloons originated from the stage or the audience, but whatever was the case, it was a nice touch.

The band has so many hits, in fact, that a few — “Stay With Me,” “Let Love In” in particular — didn’t make it into the show, though a selection of the best material from Chaos in Bloom did turn up, blending in with the older material effectively.

Leading the charge in front of a flashy, strobe-heavy light show, Rzeznik cracked jokes, quoted Bette Midler and introduced “Name,” the band’s 1995 breakout single, by saying, “This was the song that made our old friends hate us and made us realize our new friends were phonies. We’ve been navigating that weird place ever since.”

Saved for the penultimate slot in the set list, “Iris” received by far the most attention from the crowd, singing along with the emotive tune’s swelling, soaring hook, the band extending the track’s midsection to really stretch out its impact.

It’s the fall of 1998, I just got home from middle school, grabbed some snacks and parked it in front of the TV to watch this music video countdown show called TRL. @googoodolls pic.twitter.com/RJ6gIc2J3U

From start to finish, the Goo Goo Dolls’ performance was a masterclass in pop/rock precision — but with enough of the band’s earlier material thrown in to remind everyone of the unique path they took along the way to becoming a 15-million-album-selling institution with a global audience and some of the most well-known radio hits of the past few decades.

Yeah, I Like You
Slide
Big Machine
Here Is Gone
Black Balloon
Naked
Miracle Pill
Over and Over
Lucky Star
Free of Me
Come to Me
Sympathy
Name
So Alive
War
Going Crazy
Life’s a Message
Bringing On the Light
Broadway
Better Days
Iris
Tattered Edge / You Should Be Happy 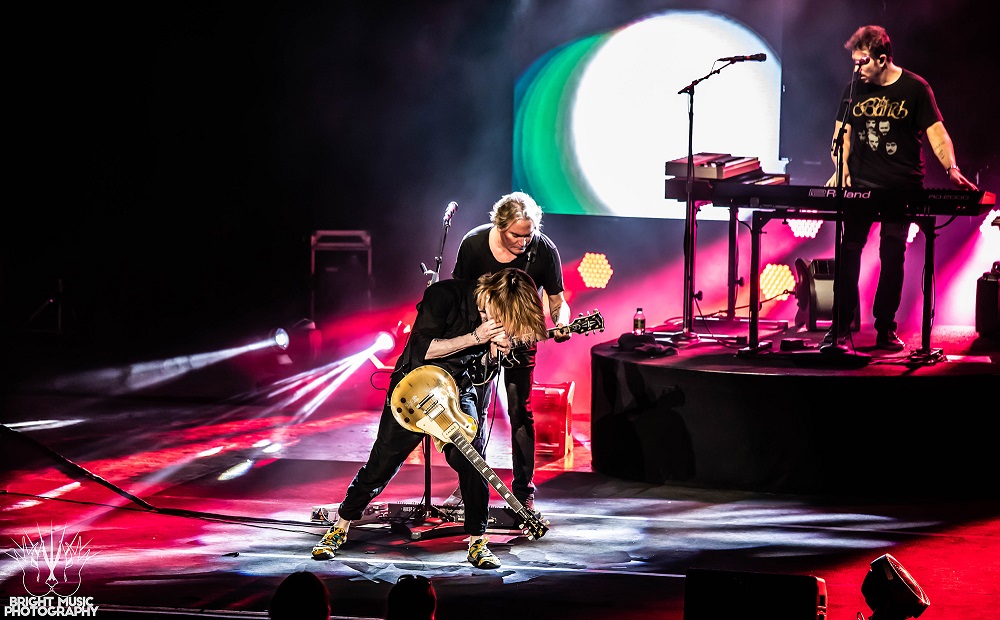 Catch a show on the remaining tour schedule — and feel free to sing along. You certainly won’t be alone in doing so.

ROCKFORD, Ill. (WIFR) - Keeping community members safe dominates conversations during a special resource fair in Rockford, which focuses on some of the city’s lower-income neighborhoods.“There’s so many people in Rockford who don’t realize, when there’s a problem in my neighborhood you’ve got somebody that you can call,” said Barb...

ROCKFORD, Ill. (WIFR) - Friday definitely felt like the first full day of fall across the Stateline with the given temperatures and sky conditions around here. Although I think we’ll see many breaks in the clouds for the weekend, the cooler-than-normal conditions look to last for several days. However, if...