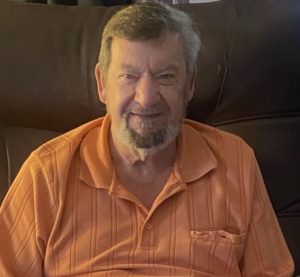 Ronald E. Howell, 73, of Norris City, IL, passed away at 4:00 p.m. on Friday, January 21, 2022, in Deaconess Midtown Hospital of Evansville, IN. Ron was born on September 8, 1948, in Norris City, IL, the son of Eugene and Eleanor (Greene) Howell. On April 19, 1975, he married Pamela Warmowski in South Elgin, IL and together they shared over 46 years of marriage. Ron proudly served his country in the United States Army, and he was a member of the Norris City American Legion. Ron was retired having worked as a machinist at Elgin Sweeper for many years. He was a member of Norris City Christian Church and loved studying the Bible. Ron was the definition of a family man and loved investing his time into their lives and watching them succeed. He enjoyed many things, from collecting knifes to watching time honored game shows. Among his favorite things were golf and woodworking. He often used his woodworking skills to build models of ships, airplanes, cars, and trucks which he gifted to his grandchildren, nieces and nephews.

Funeral services for Ron Howell, will be held at 11:00 a.m., Wednesday, January 26, 2022, at Campbell Funeral Home on Norris City with burial following in I.O.O.F Cemetery in Norris City. Friends and family may visit from 4:00 p.m. until 7:00 p.m. on Tuesday, January 25, 2022, at the funeral home. Contributions in Ron’s memory may be made to Norris City Christian Church or Rally Point Events and will be accepted at Campbell Funeral Home who has been entrusted with the arrangements.