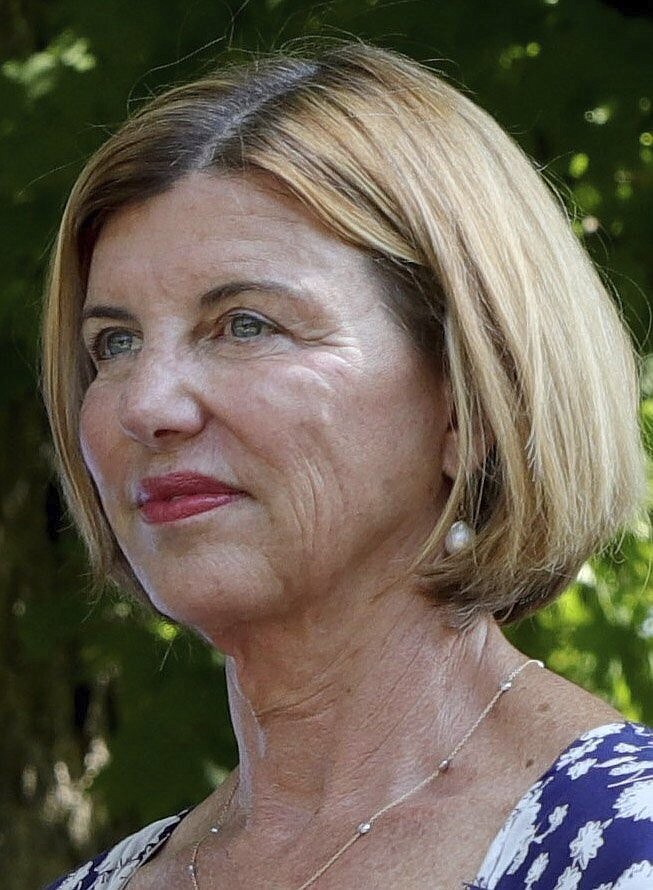 The first slate of questions focused on the state of American democracy, which Valentine said was in “crisis.”

She decried the idea of the independent state legislature theory, which argues the federal government and state courts have no role in setting up rules for elections, saying “we need rules that are the same all over America regarding our ability to vote.”

Dine said during previous runs for office he was routinely left out of debates, leaving him to believe that America doesn’t have a true democracy but rather “a club where only two teams get to participate.”

“On Jan. 6, there was an insurrection,” he said, “but he did not come from outside the Capitol.”

Asked about banning foreign ownership of farmland, both Dine and Venable say they would oppose the idea.

Valentine highlighted Schmitt’s 2013 vote in the state Senate to allow Missouri farmland to be owned by a foreign entity.

China was a key flashpoint in the GOP U.S. Senate primary, with all six major candidates jockeying for position in a party that has adopted former President Donald Trump’s hard line against China as gospel.

Valentine echoed the criticism of Schmitt on Friday.

With Congress considering legislation legalizing same-sex marriage, the candidates were asked whether they would support prohibiting discrimination on the basis of sexual orientation and gender identity.

“All people should have the right to live the authentic life they want to live,” Valentine said.

Dine agreed that LGBTQ Americans should be able to live freely without fear of persecution.

“If you’re in the public marketplace and you’re selling goods or services,” he said, “you have no right to discriminate against somebody based on their race, color, gender or sexual orientation.”

Venable said Congress doesn’t have the constitutional authority to prohibit anti-LGBTQ discrimination. That, he said, is the job of states.

Asked about the proposed constitutional amendment legalizing recreational marijuana that will appear on the Missouri ballot in November, both Valentine and Venable said they would oppose the federal government legalizing marijuana.

Valentine said she supports the amendment legalizing marijuana in Missouri because it keeps cannabis out of the hands of anyone under 21.

“This is an important issue for me,” Valentine said. “I had a son who died of an opioid overdose.”

Dine said he was once sentenced to three years in prison for possession of marijuana. Now, he said, he’s a licensed cannabis cultivator.

“I find it ironic that they had once sent me to jail for something and now they let me do it if I pay them their extortion,” he said, adding he supports both the amendment in Missouri but also any moves toward legalization at the federal level.

“We all need to start getting off fossil fuels,” he said.

The national debt is the nation’s biggest threat, Dine said. “The problem is we’re running out of money,” he said.

In an emailed statement about Schmitt’s refusal to participate in Friday’s event, his spokesman said the attorney general only wants to participate in debates that are televised statewide during prime time. He said Schmitt has agreed to participate in a debate hosted by Nexstar, which operates stations in the state’s three largest media markets, Kansas City, St. Louis and Springfield.

Valentine’s spokesman said after Friday’s event she has agreed to a televised debate last month and “will continue to review any and all invitations we have.”

The Missouri Independent, www.missouriindependent.com, is a nonprofit, nonpartisan news organization covering state government and its impact on Missourians.

Federal Circuit: First Amendment allows the “Trump Too Small” trademark The Federal Circuit has denied a petition for a rehearing of its February decision reversing the US Patent and Trademark Office (USPTO) rejection of registration for the proposed mark “TRUMP TOO SMALL.” In 2018, Steve Elster sought to register the...

Midterm Election News And Updates As Democrats, Republicans Fight For Control Of Congress In 2022

Live updates from the 2022 Midterm Election campaign trail as Republicans and Democrats begin the final weeks of campaigning before election day in November. Stay up-to-date the events and latest news surrounding the 2022 midterms from Fox News!incoming update… As Lt. Gov. John Fetterman seeks to change his perception amid...

Elections finance law complaints against an Asian day-spa operator from South Florida who allegedly funneled contributions from Chinese elites, likely including foreign nationals, to a campaign committee backing then-President Donald Trump have quietly been dismissed. The dismissal by the Federal Elections Commission came despite a staff finding that laws likely...