One of Will County’s worst crashes in decades, the 29-year-old Woulfe faces 16 counts of reckless homicide. His jury trial is taking place this week at the Will County Courthouse in Judge Daniel Rippy’s courtroom.

Around 8:35 a.m. on a sunny day with clear blue skies, Woulfe drove through the stop sign in rural Beecher along Corning Road. He crashed into Schmidt’s van as she traveled along Yates Avenue.

When the sheriff’s patrol sergeant got to the crash scene, nearly five years ago, Mathis saw Woulfe’s truck and Schmidt’s van in the northeast corner of a soybean field.

Mathis testified he retrieved the airbag control module for Woulfe’s Chevy S-10 about a week after the crash. He also determined whether Woulfe deployed his brakes during the eight seconds leading up to impact.

“At four seconds prior to impact?” Capelli inquired.

“83 miles per hour,” Mathis repeated for the third time.

When Capelli asked about Woulfe’s speed at two seconds before impact, Mathis gave a different answer.

“At one second. What was that speed?” Capelli followed up. 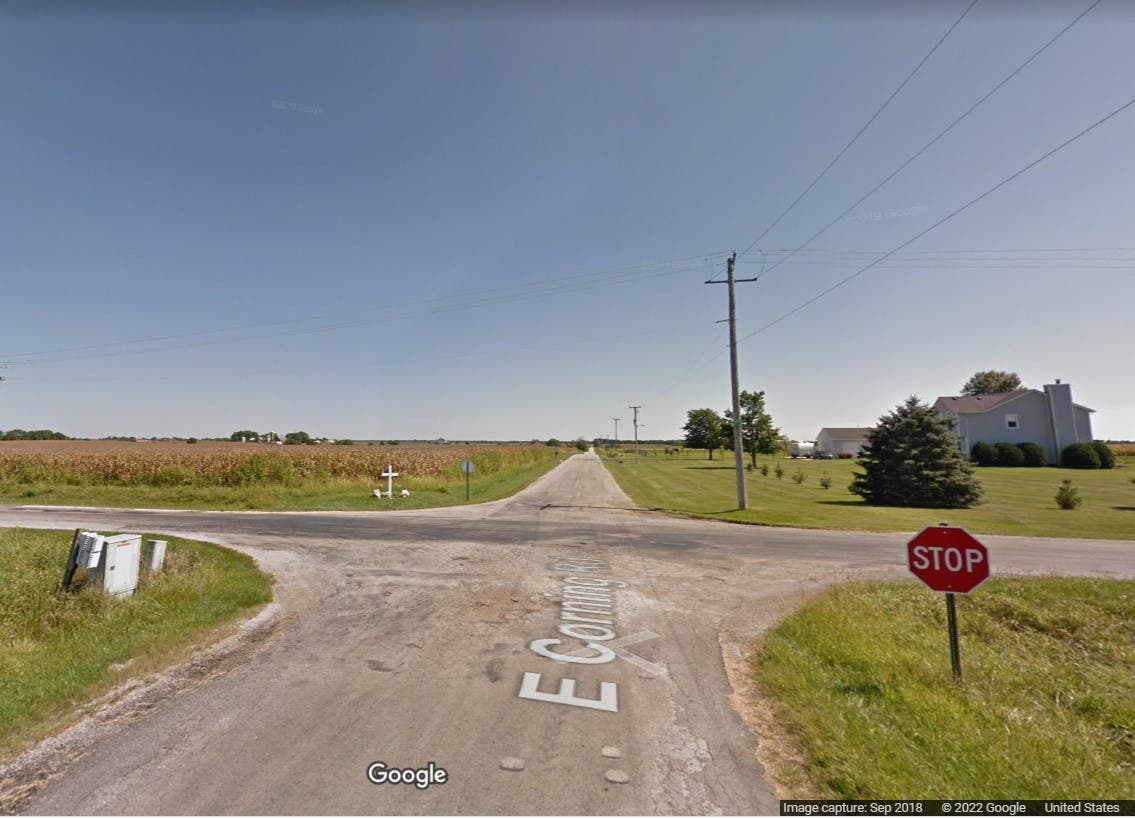 Sean Woulfe is on trial this week in Will County facing 16 counts of reckless homicide in the July 24, 2017, rural Beecher crash that killed Lindsey Schmidt and all her children. Image via Google Maps

Next, Capelli turned his line of questioning to Woulfe’s brakes for the eight seconds leading up to the crash at Corning Road and Yates Road.

“There was no brake switch applied,” Mathis testified.

The only sign of brake use was “at one second prior to impact,” Mathis testified.

Because Woulfe’s truck was 15 years old at the time, sheriff’s investigators were unable to tell whether Woulfe applied his brakes at 0.9 seconds, 0.8 seconds, 0.7 seconds, “all the way to 0.1,” according to Mathis’ testimony.

The previous day, during Wednesday’s trial testimony, a rescue paramedic testified that during the ambulance ride to the hospital in Chicago Heights, Woulfe claimed he had set his truck’s cruise control to 55 mph, and that he didn’t remember anything about the crash.

On Thursday, the Will County prosecutor asked Sgt. Mathis, “There was nothing in the (airbag) module about cruise control?”

“That is correct,” Mathis answered.

At the start of this week’s trial, Woulfe’s criminal defense lawyer, George Lenard, told the jury that prosecutors would not be presenting any evidence suggesting his client had taken prescription medications, illegal drugs, nor was he under the influence of alcohol at the time of the crash.

Additionally, there would be no evidence indicating Woulfe was talking on his cell phone or texting someone leading up to the fatal crash, Lenard assured jurors.

At the time of the wreck, Woulfe lived in Beecher. The crash happened about five miles away from where he lived.

Woulfe was on his way to work that morning.

A key theme of Lenard’s criminal defense strategy is that his client was unfamiliar with the rural intersection where the wreck happened.

On Wednesday, one of the witnesses for the prosecutors, a farm laborer who saw the crash and called 911, testified he had seen several vehicles during the previous five years blow through the stop sign posted along Corning Road.

The oncoming vehicles traveling along Yates Avenue did not have a stop sign.

“You learned through your investigation that Mr. Woulfe was not familiar with that road?” Lenard asked Thursday.

“You did not learn that?” Lenard followed up.

Will County Judge Daniel Rippy told the lawyers and Woulfe to be back in his courtroom by 9 a.m. Friday.

Capelli and Assistant Will County State’s Attorney Jeff Tuminello will continue putting on their witnesses as part of the prosecution’s case.

To request removal of your name from an arrest report, submit these required items to arrestreports@patch.com.